You are here: Home / Dustin Bajer's Articles / Urban Glaciers In A Time Of Climate Change

Urban Glaciers:  In a world where glaciers are disappearing, could Northern Cities build them from scratch?

A slightly tongue-in-cheek, slightly serious look at what to do with all that snow. 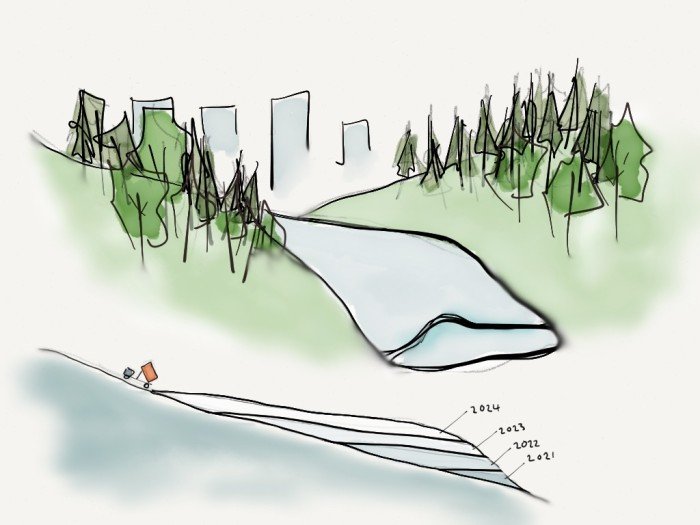 Urban Glaciers: In a world where glaciers are disappearing, could Northern Cities build them from scratch? A look at what to do with all of that snow.

If you visit Edmonton, Alberta (Canada) travel the city’s ring-road in search of giant mountains of snow. Often lasting well into Summer, some citizens have taken to betting when on when it’ll melt. What if Northern cities took it one step further? In a world where glaciers are disappearing, might it be possible to build one from scratch? Well perhaps. Technically speaking, glaciers form wherever snowfall exceeds melting. Unfortunately, that’s increasingly rare. However, in Northern Cities like Edmonton, this could be with a little help.

Each year, Northern cities remove thousands of tons of snow from urban street and piles it into giant mounds outside the city. Due to sheer volume, the mounds last well into Summer, though, if built in a depression (such as a ravine) could last until the following Winter. When Winter hits again, new snow is added to what remains from previous seasons. In this way, Urban Glaciers grows from year to year. Just like the real deal.

Here’s an odd and somewhat sad thought, urban glaciers could be the only growing glaciers in the world; the last of its kind. Of course, cities creating artificial glaciers would have to be mindful of all the crap they’re tossing onto the roads (salt, sand, trash, car exhaust)…but shouldn’t they anyway?