Mark: Ah yes, loves goes in hand in hand with those birds and bees does it? When it comes to backyards, though, not everyone loves the idea of birds or bees. yesterday we talked about the possibility of the city approving urban chickens. Today the city comes out with a report that may suggest opening the door to urban beehives. Dustin Bajer is an Edmonton bee enthusiast, he’s also teaching permaculture at Jasper Place High School. Good morning Dustin.

Dustin: Good morning, thanks for having me.

Dustin: Yeah sure. Personally, I would really like to see some movement on urban beekeeping. I do think that there’s some legitimate concerns and I do think that those concerns should be addressed. Not everyone should have a hive of bees in their backyard or on on their balcony but if done responsibly I think that it’s a fairly forward thinking move by the city (or that it would be) and I think that it has a lot of potential.

Mark: So what would be the good things about having backyard bees, if people know what they were doing?

Dustin: Sure. Well, I think that there’s quite a few different aspects to that. I think that for a lot of people access to the honey is something that they’re interested in. For others, the bees themselves are absolutely fascinating. You know, they’re these amazing little creatures that head out of the hive and head around the city and can harvest it and bring it back to create this really delicious substance so I think that depending on the individual it varies.

Mark: I’ve got these honeysuckle vines, as I was telling you, and there’s bees all over it like they’re going crazy. The bees are loving it. So, I mean, bees do play a role in agriculture, I mean, they’re much needed right?

Dustin: Oh, absolutely. Absolutely, and what’s really interesting is, and we don’t talk about it a lot, but bees do quite well in an urban environment. If you think about it, you have a tremendous diversity of plants, you’ve got all of the fruit trees (apples, plums, cherries). You have saskatoons that are growing wild in the river valley. You have all of the ornamentals in the yards, so there’s quite a diversity of food sources for them in cities and plus you get that kind of heat island effect of a city so they may actually, in some cases, do better in cities than they do in a rural setting. 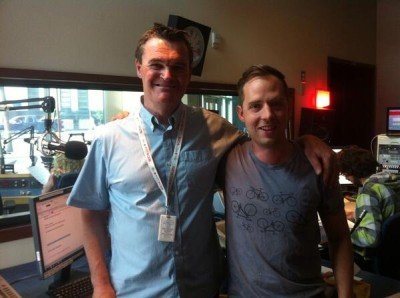 Mark: So the bees like the urban centre. So, some people are opposed to the idea, they’re worried about being stung, I guess. The buzzing, there could be irresponsible owners, people who don’t do well with them. How can these concerns be addressed?

Dustin: Sure. Well, we’ll have to see what the city does, but I don’t think that anybody’s advocating…you know “let’s just throw bees everywhere”. You know, other cities have have been doing it, and they’ve been doing it successfully, Calgary would be an example, and so it would be fantastic to look at what they’re doing and what’s been working. We don’t have to start from scratch. As an example, perhaps there has to be a process in which you get permission from your neighbours, perhaps beehives have to be located so far from the property line, perhaps there’s a maximum number of beehives that you can have and so I think that all of these should be taken into consideration. Obviously, some people are allergic, I feel that the threat of being stuck is not as big as one might expect but those fears, be they legitimate or not, need to be addressed.

Mark: If you were in closer proximity to the beehive, wouldn’t you have a higher likelihood of being stung.

Dustin: Um.. I mean, statistically, yeah, if you’re hanging out right in front of a hive, you’re probably more likely to be stung..but I don’t… they’re kind of, there’s doing their own little thing. Unless they perceive you as some kind of threat it’s not very common. You know, I’ve been stung a few times over the last couple of years and it’s usually because I made a mistake and I’ve grabbed a bee with my bare hand while trying to play with the comb or stepped on a bee…or something like that, you know. Totally fair, if someone steps on me, I’m going to get a little angry as well.

Dustin: I absolutely would, for a few different reasons. I live in the city so, for me, it would be more convenient. I also think, as I mentioned earlier, that bees do quite well in the urban setting but also there’s this fantastic community element and so I’m hearing all the time from other Edmontonians that are interested in keeping bees (for various reasons)…some for the honey and some just because of the act of beekeeping, some for the community piece, some want their kids to get involved and so I think that there would be a tremendous opportunity here and I would absolutely jump or the bee bandwagon.

Mark: This is also kind of part of the movement of local food and just the whole piece about being more connected to nature in some ways and connected to the food that we consume and that seems to be a growing thing in Edmonton.

Dustin: That’s huge and I I think that movement on bees would further enable that and so like I said, there’s obviously considerations, not everyone should have a hive and not everybody should have a cat and dog, maybe, so let’s do it responsibly. Let’s enable those individual that can handle that responsibility and can sort of further that local food movement. I think that if bees are legalized in the city, I think you’re doing to see more honey stands open up at the farmers’ markets. I think you’re going to see value added products like wax candles, maybe some honey wine, who knows…(Mark: honey wine)…yeah, mead. That could be…this guy here might know a little about that (pointing to a wine columnist sitting beside me…a gesture lost on the radio).

Mark: Well Dustin, thank you very much and we’ll see how this all goes at city hall today.

Dustin: Alright, well thank you very much for having me

Mark: Dustin Bajer is a local bee enthusiast and permaculture teacher, also a member of the city of Edmonton’s food council.