The zombie apocalypse has happened, and all of the gardeners have been saved – something to do with exposure to healthy soil microbes. Using ecological principals permaculture gardeners have been using needs and yields analysis to use the zombies to their advantage and create a sustainable future.

This presentation is an audio recording from a talk given at an Edmonton Horticulture Society event (October 24, 2019) titled “Gardening in the Zombie Apocalypse.”

END_OF_DOCUMENT_TOKEN_TO_BE_REPLACED 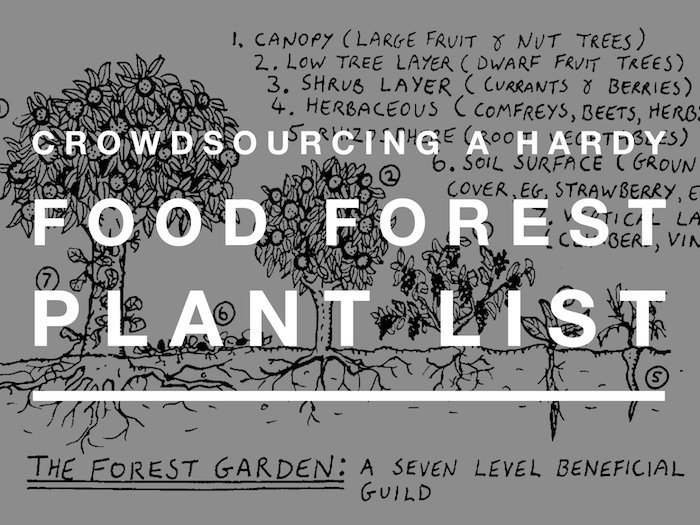 As the climate continues to warm it will be increasly important to explore regernative forms of agricutlure. A food forest is a food-producing model that seeks to mimic the patterns of a natural forest ecosystem. Ecosystems are incredibly diverse and primarily made up of perennial plants.

The following project is an attempt to crowdsource a list of plants (according to layer) ideal for food forests in cold hardy, zone 4 or colder, climates.

Before we move on, I want to acknowledge that this is a crowdsourced project and that its development and success is made possible by the individuals who are continuously editing it – not the least, The Urban Farmer, Ron Berezan, whose “Edible Plants For The Prairies” list has been the jumping off point of this project.

Layers of a Forest

One way to think about the structure of a forest is by describing it in layers. Each layer of a forest occupies a different space in the system – each plant carving out a niche and contributing to the whole.

The tallest plants in the forest make up the canopy layer. Canopy plants reach for the light and thus shade much of the forest below.

While the understory and shrubs are thought of as separate layers, I have brought them together as a single group. This layer is typically made up of small trees, and multi-stemmed woody-shrubs. Shrubs and understory plants that have evolved the ability to live beneath the canopy or at the margins of forests.

Herbaceous plants have non-woody stems and usually die back to the ground each fall. As a result, they tend to be shorter than most woody shrubs.

Ground covers are short, crawling, or clumping plants that may be woody or none-woody. They protect the forest floor from the elements.

As is the case above ground, the roots of each plant occupy various depts of the soil. However, when talking about food forests, the root zone is usually taken to mean plants whose roots are edible.

Vines are long, spindly, climbing plants that are capable of occupying the vertical spaces within a forest. They can be herbaceous and die back to the ground each year (hops) or woody (clematis and grapes).

The following plant list is an open Google document. As a result, anyone can access and edit its contents. The list is edited by myself and backed up periodically to ensure quality.

Follow this link if you wish to view the plant list in a separate page or edit its contents. Here are a few guidelines when editing the document.

At the bottom of the window, you will see tabs corresponding to the various food forest layers mentioned above. Within each layer, you will see a curated list of plants, their common name(s), botanical family, botanical name (Genus species), as well as plant notes.

If you’re looking for a food-producing ground cover, select the ground cover tab at the bottom and browse through the list of suitable plants. If the botanical name is blue than it has been linked to an external page with more information. See the list by clicking here or on the image below.

The long tail of food has the power to transform our entire food system. It’s diverse, local, unique, and sometimes illegal. 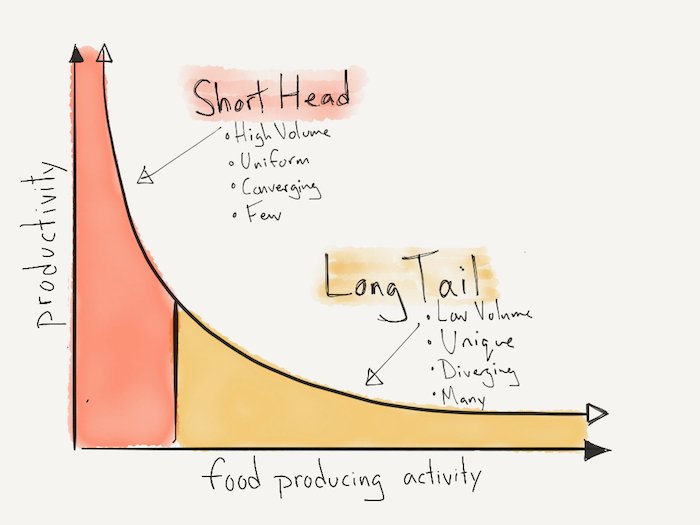 The “short head” and “long tail” of food where the area of each represents an equal volume of production.

Imagine that you could line up every conceivable food production activity and arrange them from most to least productive. On one end we’d see highly productive industrial farms, followed by large family farms, large and medium scale market gardens, hobby farms, CSAs, nurseries, urban agriculture projects, community and backyard gardens – all the way down to growing herbs on windowsills. Each produces food – all of it counts. END_OF_DOCUMENT_TOKEN_TO_BE_REPLACED

In June of 2016, the City of Edmonton enacted an Herbicide Ban with the aim to “eliminate non-essential uses of herbicides on city-owned land”.  It’s been a year since and despite the fact that some people are losing their shit, I’m proud of my City for sticking with their decision – going so far as piloting a herd of goats in one city park.

I will admit that I’ve noticed and increased in dandelions in City parks, though, as an urban beekeeper I’m not in the least bit bothered. I like dandelions – they are beautiful to look at, good at breaking up poor and hardpan soils, and edible.

Young dandelion leaves make a lovely salad green while petals an exceptionally pleasing when steeped to make teas and wine. But for this post, I’d like to turn our attention to the root-cause. What if we don’t have a weed problem? What if we have a root beer deficiency?

Dandelion roots can be used alongside another noxious weed that’s taken up residence in Edmonton – burdock.

If you’re not familiar with burdock it’s a large biennial plant with heart-shaped leaves and purple/pink flower clusters that turn into hooked bracts (burs) when mature (the inspiration for velcro). Like dandelion, burdock has an extensive list of culinary uses. Sidenote: If you go to an Asian grocery store (such as T&T or Lucky 97 here in Edmonton) burdock is referred to as “gobo root”.

Locally, burdock is abundant in the River Valley and some of the older neighborhoods including, Old Strathcona, Riverdale, Rossdale, Boyle, and McCauley.

Great burdock originates from the temperate regions in Europe. In the Middle Ages, it was favoured as a vegetable and the roots are still commonly used in Asian cooking. It can also be found in a variety of herbal supplements.

D&B Beer is thought to have originated in Britain in the middle ages and is made by fermenting a tea made by boiling the roots of dandelions and burdock. The flavour is “mildly bitter and aromatic). You can buy a non-alcoholic version at some local grocery stores, but we’re going to make the real deal.

The clip and recipe below are from RiverCottage.net, though, I would anyone making D&B Beer to experiment. A quick Google search yields various approached to dandelion and burdock beer – here’s one that also uses nettle (another local noxious weed). I’ve made dandelion wine using petals and have an abundance of honey laying around the house so I’d probably incorporate both.

Contact me, if you make a batch! I’d love to hear how it went. There’s a lot of exploration to be had. How might dandelion and burdock integrate into a traditional brew? I’d love to see a local brew-pub make a batch – Situation Brewing’s daily cask comes to mind. How about a distilled version? Strathcona Spirits make a mean gin that already features “rogue-picked Seaberry (Seabuckthorn) from the streets of Edmonton” – is rogue picked dandelion and burdock out of the questions? D&B could be an Edmonton thing – an authentic Edmonton flavour.

Scrub and finely slice the burdock and dandelion roots.

Put them in a large pan, pour on 2.5 litres boiling water and add the carragheen.

Boil for half an hour; experience the aroma of an unpromising vegetable stew.

Take off the heat, add 2 litres cold water, the sugar, treacle and lemon juice and stir until the sugar has dissolved.

Strain the liquid into a clean fermenting bucket, cover and leave to cool.

When your brew reaches room temperature, pitch the yeast.

Cover and leave to ferment for up to a week, until the specific gravity is down to 1010.

If you want to be safe, carefully siphon into strong swing-top bottles at this point.

The flavour of dandelion and burdock seems to follow a bell curve of: too sweet, horrible, really rather nice, horrible, poisonous – with the ‘quite nice’ occurring at the 3–4 week point and extendable by keeping it in the fridge.

The flavour is mildly bitter and pleasantly aromatic.

You Are Your Watershed

A watershed is the area of land that captures, soaks up, and channels water towards increasingly large bodies of water. We think about watersheds as wetlands, streams, creeks, lakes, and rivers but they’re also forests, trees, soils, animals, and you.

You are 60% watershed – you’re a small pond capturing water from the environment – a small pond with legs. From this perspective, a 150-pound person walking hill is 90-pounds of water flowing against gravity.

Eating Beyond Our Watersheds

Each day, a few litres of watershed passes through your body via foods and liquids you consume – even bread is 40% water.

Much of our food is imported from distant watersheds – the banana I ate for breakfast, as an example, was 74% Ecuadorian water. In fact, in 2013, Ecuador smuggled 4.11 millions tonnes of water disguised as 5.55 million tonnes of bananas out of its local watersheds.

Here are some numbers that I managed to dig up:

Exporting food between watersheds has an ecological impact. Globally, patterns of trade could be seen as wholesale changes to weather and rainfall patterns – causing rivers to dry up. California, a state prone to droughts, exported over 378 billions litres of water to China for cattle feed. If you consider all of the food it exports, especially fruits and vegetables, one could argue that California’s main export is water.

A foodshed is a geographical area in which food is produced and consumed. So here’s my question – since the food you consume is mostly water, might a watershed diet be a useful way to think about local a desired local foodsheds? How closely should your watershed and foodshed align? As a geological feature, it’s less arbitrary than political borders or imaginary circles drawn concentrically around your kitchen (see 100 Mile Diet).

In truth, I’m not entirely sure what a watershed diet might look like. I’m not even sure that I could tell you what my watershed produces – probably not a lot of bananas. What would a watershed meal look like?Could it even be done? How would it change seasonally? If anything, it brings up more questions.

A Good Portion of What You Eat is Cloned

In 1868, Maria Ann Smith noticed an interesting apple seedling growing by a creek on her property. She grew the plant out and it eventually produced apples with green skin and sweet, tart flesh. She liked the apple so much that she took cuttings – a propagation technique that involves starting new plants using pieces of root, stem, or leave from the parent plant. Others liked the fruit as well and they too took cuttings. Almost 150 years later,  Maria Smith’s Apple has been propagated thousands of times and is one of the most popular apple varieties on the planet – you know it as the Granny Smith.

Notice that I said the Granny Smith and not a Granny Smith. The difference is small but important because every Granny Smith apple you have ever eaten is an exact copy – a genetic clone – of the seedling Maria identified in 1868. Ever time you bite into a Granny Smith – regardless of where it was grown – you are biting into the same apple. END_OF_DOCUMENT_TOKEN_TO_BE_REPLACED