Biophilic Cities Love and Integrate Natural System Into Their Design

When ecologist Edward O Wilson coined the terms biodiversity and biophilia, he opened our eyes to new ways of viewing the world. Now, architects, designers, and academics such as Richard Register, Tim Beatley, and Geoffrey West are using lessons from ecology and network theory to design tomorrow’s resilient urban environment; biophilic cities.

What is a Biophilic City?

A biophilic city then embraces and incorporates natural systems into its design.  They integrate the built and natural worlds in beneficial ways. The result? Biophilic cities are more attractive and less prone to floods, droughts, resource shortages, waste, and boredom. Biophilic cities have the potential to save money, resources, and spark the imagination.

Cities Are Natural – And Good For The Environment

We tend to view our built and natural environments as opposing forces. But I would argue that this perceived incompatibility has more to do with poor design than universal law. As it turns out, urban environments already play host to countless organisms. Let’s go a step further and argue that cities are natural. Far from being static, nature is the process of moving from few to many connections. In this successional process, each stage of builds upon the previous stage and creates the conditions necessary for the next. In this way, ecological systems diverge, diversify, and expand over time. What starts off as fragile becomes complex and resilient. As it turns out, cities behave in a similar way. What starts off as a small settlement expands to include many of the needs and services necessary to support the community. At each stage, the future is built on the present. As new connections grow, the system expands, and new possibilities emerge.

Resiliency is a property of systems and a measure of how connected its pieces are. As natural and built systems expand, their potential for connections increases rapidly. 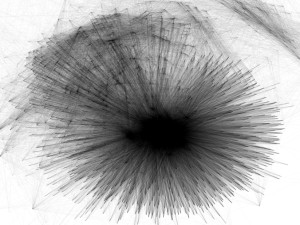 Each point in a Muir web represents a living or non-living element in an ecosystem. Lines between elements represent relationships. As biodiversity increases, the potential for connections increases. The more relationships there are, the more resilient the ecosystem tends to be. 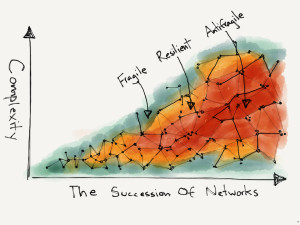 Most systems start with few connections. As new elements emerge the number of potential connections increases. In this way, systems move from fragile to resilient and (at times) antifragile.

Ecologists describe the intersection of two ecological systems as an ecotone. Ecotones bring together the biodiversity of each plus a few others (think otters at the edge of a lake). As a result, ecotones are rich in ecological relationships. They are among the most biologically diverse places on the planet. By design, Biophilic Cities are ecotones that connect economy, society and nutrients (money, food, and waste) with ecosystem services. Ex. Waste water runoff or the heat island effect become ecological solutions. 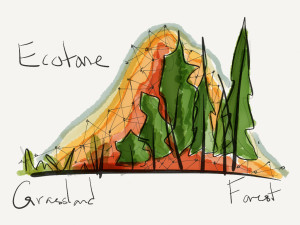 An ecotone is where two different ecosystems meet. Ecotones contain the connections between two ecosystems. 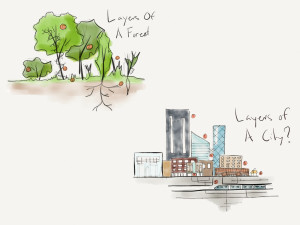 Cities and Ecosystems build up layers over time. As new organisms or elements emerge, they search out connections within the system. Can analogies be drawn between ecological and urban strata? 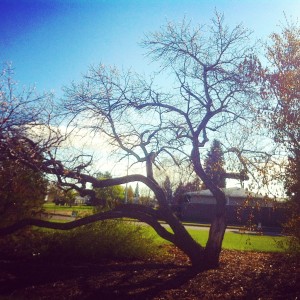 One of three historic Edmonton apricot trees growing on the West side of 75th Street.

There’s something simultaneously very personal and completely public about having a favorite tree; it’s an interesting intersection between private, urban, and natural history. Trees are rooted in place and to love a tree is, in some small way, to love where you are – to become a part of it.

For anyone who’s walked around Edmonton, you’ll know that the City’s urban forest is pretty impressive. But trees aren’t just beautiful to look at; they cast shade, store carbon, provide habitat for animals, soak up millions of liters of water, and (yes) some even grow food. END_OF_DOCUMENT_TOKEN_TO_BE_REPLACED

Urban Glaciers:  In a world where glaciers are disappearing, could Northern Cities build them from scratch?

A slightly tongue-in-cheek, slightly serious look at what to do with all that snow.

Urban Glaciers: In a world where glaciers are disappearing, could Northern Cities build them from scratch? A look at what to do with all of that snow.

If you visit Edmonton, Alberta (Canada) travel the city’s ring-road in search of giant mountains of snow. Often lasting well into Summer, some citizens have taken to betting when on when it’ll melt. What if Northern cities END_OF_DOCUMENT_TOKEN_TO_BE_REPLACED

Edmonton’s Food Forest – An Edible Ecosystem in the River Valley

Each summer since 2014, hundred of volunteers descend into Edmonton’s river valley to add thousands of edible, native trees and shrubs to the City’s first publically planted food forest.

Located on the South facing slope of MacKinnon Ravine, the goal of the food forest is to END_OF_DOCUMENT_TOKEN_TO_BE_REPLACED

Ecological Education – What Can Nature Teach Us About Education Systems And Learning?

Ecological education is a lot more than teaching students about the environment (though that’s part of it). Rather, ecological education at its core is about is creating systems that reflect the patterns and principals of ecology. END_OF_DOCUMENT_TOKEN_TO_BE_REPLACED