You are here: Home / Dustin Bajer's Articles / 9 School Urban Agriculture Projects With The Power To Kickstart The Local Food Scene

One of the best ways to kickstart a local movement is to provide early access to training. I saw this firsthand while watching Jasper Place High School’s Culinary and Pastry Arts students. Under the guidance of teacher and Pastry Chef, Kelly Hobbs, JP culinary arts students won more over 28 awards between 2009 and 2017. But what happens when these students leave school? A sizable number of them head to programs like NAIT or SAIT, pick up jobs in local restaurants, and gradually transform the local food scene. There are local food benefits to graduating even one new local chef each year.

Ryan Mason and Cathryn Sprague of Reclaim Urban Farm showing off their herb and micro-green operation.

Unfortunately for local food, there aren’t a lot of post-secondary options for urban farming and most urban kids haven’t been exposed to agriculture as a potential career – especially considering that farming in cities isn’t commonplace. It’s a catch-22 – school’s don’t teach urban farming because there’s a lack of skilled practising farmers and there’s a lack of trained farmers because it’s not something we teach. Fortunately, as small urban farms get a foothold and the public becomes one again interested in where their food comes from, school horticulture and urban ag programs are popping up. Education can make all the difference.

Schools can kickstart urban agriculture and local food movements by (1) introducing urban agriculture as a viable career pathway, (2) providing training in various urban agriculture-related skills, and (3) providing safe spaces for exploration and failure.  This last point is worth touching on as businesses are less tolerant of making mistakes. Whereas crop-failure could spell doom for a small business, it’s another learning opportunity in the classroom. It’s essential that students fail big and innovate while the stakes are low.

When you think about urban agriculture, you might be picturing mounds or carrots, heads of broccoli, bunches of chard, and bags of cucumber – in other words – vegetables. Growing plants can be as simple as throwing some potatoes into a bucket or as extensive as cultivating a garden or raised bed at the school. If you’re studying food security and nationalism, why not recreated a victory garden at your school?

If you’re worried about Summer care, consider partnering with the immediate community to form a joint school and community garden.

Herbs and microgreens are vegetables (you got me), but they’re often faster growing, offer higher value, and take up less space than larger crops. To create a successful microgreen farm, all you need is a shelf, a little soil, seeds, and a well-lit window. 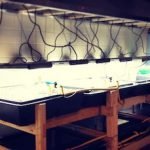 For the technically inclined, consider building a school aquaponics or hydroponics system. Ideal for a shop, horticulture, or science class, aquaponics and hydroponics involve growing plants without soil in a recirculating volume of water. In an aquaponics system, fish waste provides nutrients for the plants. Working systems can be as simple as a modified fish tank, a timer, and a grow light. My favourite book on aquaponics is Aquaponics Gardening: A Step-by-Step Guide to Raising Vegetables and Fish Together.

If your school has space, consider perennial food production such as berries, fruit trees, or herbaceous plants like rhubarb and asparagus. A perennial food orchard or food forest can be a separate site or part of your school’s existing landscaping. Fruit tree production is a long-term project but a very rewarding one.

If you don’t have the room for an orchard, consider creating a school nursery. Start plants from seed or by taking cuttings. Repot plants as they mature and sell them as a fundraiser. 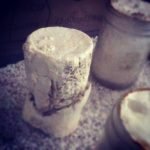 For some reason, mushrooms are an urban agriculture blind-spot. That’s unfortunate if you consider that mushrooms don’t require sunlight. Pick up a copy of Growing Gourmet and Medicinal Mushrooms or The Mushroom Cultivator. If you’re looking for mushroom spawn and culturing supplies, check out Fungi Perfecti.

I had the pleasure of working with a student with an interest in growing oyster mushrooms at school. We picked him up a kit at a local store and set him free to experiment. A few years later while attending Olds College’s Brewmaster program, Alex came up with the idea to grow oyster mushrooms on the breweries spent grain – a waste product of the brewing process. Alex can since turned this into a business.

There aren’t a lot of school keeping honeybees at this point, but I suspect that it’s a matter of time. Since becoming legal in Edmonton, I’ve been receiving an ever increasing number of calls from schools each spring. There are some obvious concerns about keeping bees on school grounds, but much of the concern has more to do with perceptions than reality. I would recommend enclosing any school hives in a protected area but that’s is as much about protecting the bees from kids as it is the other way around. Either way, beekeeping in an incredibly rewarding experience with multiple ties to existing curricula.

As with beekeeping, there aren’t a lot of schools tending flocks. Also like beekeeping, animal husbandry has many links to existing curriculum. If your city doesn’t yet allow chickens don’t be discouraged – talk with school administration about your plans and map out the educational benefits before contacting the city. City officials will often consideration a project if its goal is educational.

If your school has a woodshop or welding class, consider building and selling garden infrastructure such as raised beds, cold frames, garden trellis, and backyard greenhouse kits. In addition to providing hands-on building experiences, an affordable supply of materials could mean a world of difference for a young urban agriculture movement.

Did I miss anything? What do you think? Let me know by dropping me a note in the contact me page.