You are here: Home / Dustin Bajer's Articles / Report A Honeybee Swarm or Colony

Do Suspect That You Have a Swarm or Colony of Honeybees?

If you have a swarm of honeybees, text (780) two-three five – zero-two-two three. If you are unsure that they’re honeybees, please take the quick quiz below.

Swarming is a natural honeybee behaviour and occurs when a colony splits itself in two. When a healthy hive gathers enough resources, the queen and two-thirds of her workers will leave in search of a new home. The remaining bees will raise a new queen and continue at the original site. Swarming is how one honeybee colony creates another.

Once a swarm has left the hive, they’ll form a cluster (bivouac) and send scout bees into the surrounding area in search of a suitable cavity to build a new home.

If you see a cluster of insects, you almost certainly have a honeybee swarm. Native bees and wasps do not exhibit this same swarming behaviour.

If a colony of honeybees has moved into your home, they will be less obvious and thus more challenging to identify. Honeybee colonies build their homes in hollow cavities. When occupying a building, you’ll usually find them inside empty walls, behind soffits, inside vents, or in the attic. You typically won’t find honeybees at ground level. Bees entering at the base of the building or under a concrete slab or sidewalk are almost always bumblebees (see below).

Colonies contain tens of thousands of bees, so you should notice lots of traffic entering and exiting the building. One or two insects at a time might indicate that you have bumblebees or wasps.

Unlike honeybees, all of Alberta’s native bees and wasps have annual life-cycles and tend to make small, non-intrusive nests. If at all possible, learn to live with them. Have kids? Turn your resident insects into a research project. Native bee and wasp colonies die at the end of the season; at which point, you can remove to nest or close off its entrance.

Please note that it is not advisable to block-off the entrance to a honeybee colony. 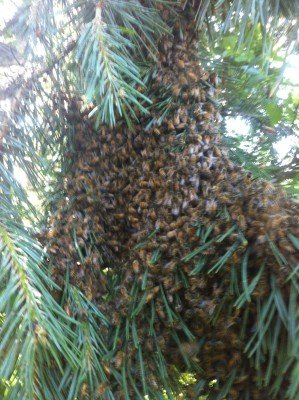 A Swarm of Honeybees Resting in a Pine Tree, Edmonton, Alberta.

Do You Have a Swarm or Colony of Honeybees? Questionnaire.

If you’re not sure if you have a swarm, colony of honeybees, bumblebees, wasps, or something altogether different, complete this 3-minute questionnaire. Answer the questions as best as you can, and it will present you with some suggested next steps.

If you want to know more about what swarms or wish to catch swarms join my Edmonton Swarm Catchers’ List.