I stumbled upon pineapples pits while researching old botanic gardens. The Heligan garden – sometimes referred to as The Lost Garden’s of Heligan – is located in Cornwall, England as was created by the Tremayne family in the 18th century, fell into disrepair after the First World War and was restored in the 1990s. Among the ruins was a strange structure designed to grow pineapples.

The pineapple pit, as it has come to be known, is a series of three trenches connected by permeable, hollow walls. The two outside trenches filled with horse manure generate heat during decomposition. The excess heat travels through the hollow walls into a central glass-topped trench – essentially a cold frame – growing tender pineapples. 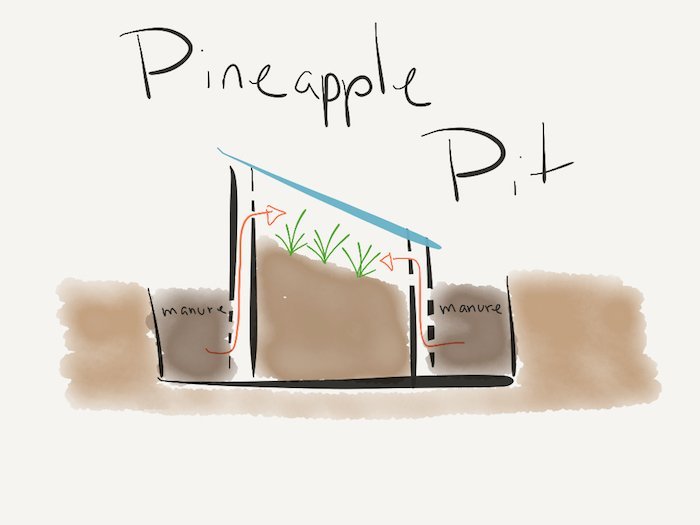 It doesn’t take long on the internet to find many creative ways to heat a garden with compost. At its most basic, a single trench it dug, filled with compost, covered with straw, and topped with soil. As the compost breaks down, heat passes through the layer of straw to heat the earth above. But there are two things that I love about the Pineapple Pit; that hose manure would have been everywhere in the 18th century and that pineapples would have been almost nowhere outside of the tropics. Here, at Heligan, gardeners turned a shit situation into a tropical treat.

For more information on the Heligan Garden and its pineapple pit, visit Heligan.com.