Before we begin – if you’re in the Edmonton area and there IS a swarm of bees outside your window, call (780) two three five – zero two two three or visit Report A Swarm Or Honeybee Colony.

What is a Swarm? 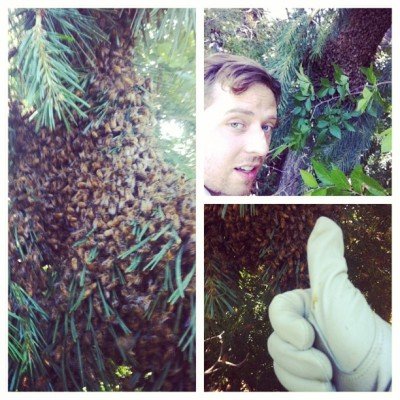 Swarming is a natural process that occurs when a colony of bees splits in two – swarming is how one colony produces another and often triggered by a lack of space.

Swarming is most common in the Spring and early Summer when strong hives run out of space inside the hive. When this occurs, the colony will prepare a new queen before half of the bees and the current queen search of a new location. A swarm is what we call the group of bees that have left the hive in search of a new home.

Swarms will usually settle on a branch and ball together while individual bees search for a suitable hive location; hollow tree trunks, old barn walls, etc. When the homeless colony agrees upon a site, the swarm will fly to the new location and begin constructing comb.

However, if you call someone familiar with swarm catching (local beekeeping, as an example) they can often capture the swarm and introduce it to an empty hive. More often than not, the bees find the hive suitable and decide to stay. The swarm catcher will move the hive to a preferred location.

Here’s a video of the swarm catching process. This is a swarm that my father and I captured outside of Edmonton. Notice how docile the honeybees are; completely gorged on honey (think how you feel after a Thanksgiving meal) and primarily concerned with finding a new home, the bees don’t pay much attention to us.

People report swarms to the group by messaging me or Remind. Reported swarms are sent to everyone at which point it is first-come-first-serve.