Edmonton’s Food Forest – An Edible Ecosystem in the River Valley

Each summer since 2014, hundred of volunteers descend into Edmonton’s river valley to add thousands of edible, native trees and shrubs to the City’s first publically planted food forest.

The City of Edmonton has an ambitious goal of doubling its urban forest through naturalisation and thus created the Roots for Trees program – “an enhanced planting initiative which intends to increase tree planting within the city. The annual target is to plant an additional 16,000 trees annually on public and private land.” Roots for Trees achieves much of their work by partnering with community members and organisations to coordinate public planting events. If you’ve seen people planting along Edmonton’s the Whitemud or Yellowhead (freeways) – that’s Roots for Trees.

In the spring of 2014, I was approached by then principal of horticulture, Travis Kennedy about the potential to tweak the City’s naturalisation planting to favour edible species. Travis concluded that Roots for Trees could partner with the local permaculture community to simultaneously meet the goals of both groups.

I like to think that the Edmonton River Valley Food Forest has four general goals:

1. Native – composed of species native to Edmonton’s river valley.
2. Low/No maintenance – Must be a functional part of the ecology and build biodiversity, ie. naturalisation.
3. Edible, forageable species – publically accessible to wildlife and residents.
4. Scalable – the process should be scalable over time and transferable to multiple sites.

The idea behind the food forest was to create something self-sufficient and self-maintaining. From the City’s perspective, they’re primarily concerned with the first two goals; volunteers were mostly interested in the third. I added a 4th goal because I’d like to see this kind of planting expand each year and potentially move across the City (or between cities).

I firmly believe that the project has been successful and continues to grow because the goals of the City and the volunteer planters continue to be aligned in such a way everyone benefits. However, these goals do provide some restrictions. As an example, some volunteers would like to see introduced food species included in the food forest. Unfortunately, that would run counter to the first goal – native.

A successful day of planting and a mild Winter served the site well. Unfortunately, Summer drought and above average temperatures have reduced survival rates. The location was especially stricken due to its sloped Southern exposure. Despite adding more than 20 water harvesting swales, survival is challenging without rain. As a result, it was decided to monitor the original planting location with the goal of adding infill at future events.

For some added canopy, we’ve decided to expand the food forest to a location 200 meters West. The site offers a combination of open and shaded areas and increases the variety of plants we can use. The site’s gradual slope also reduces the need for swales (more time planting) and provides better access for watering trucks. 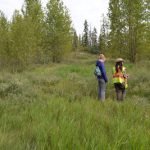 Members of the Roots for Trees team scope out a location for the 2015 Edmonton Food Forest Expansion.

2016 saw the doubling in size of the Western expansion of the food forest. Last year’s plants are doing very well on the site. Whereas 2015 saw a tonne of beaked hazelnut and highbush cranberries, the 2016 planting highly features saskatoons, currants, and gooseberries.