You are here: Home / Dustin Bajer's Articles / 11 Reasons Why The Magpie Defines Edmonton

Edmonton Magpie. The Bird We Love To Hate

I know of no other Edmonton resident more controversial than Pica hudsonia; often referred to as the black-billed magpie or an annoying jerk. While many of us resent its 4 am wake-up calls, others find the Edmonton magpie fascinating. It’s the bird that Bird Studies Canada refers to as a “charming and charismatic species…easily recognized by its bold patterning and chatty personality.” Regardless of how you feel, here are 11 reasons why we should embrace the controversial magpie as a symbol of Edmonton.

1. Magpies Are Tough
Who better to represent the most Northern large city on the continent than a bird that chooses to live here year-round? Rather have some “pretty” migratory bird? Heck no! Move over robins, outta my way ducks. The magpie is here to stay. Minus 40 outside? Not a problem for this local. Just like Edmonton and the people who choose to live here, this bird is winter-ready.

2. The Magpie Is Native
The Magpie has been here for 3-4 million years and is a descendant of a group of Eurasian magpies that crossed the Bering land bridge. Just like some local peoples I know.

3. The Magpie Is Industrious
The magpie is one of the only birds in North America that makes an elaborate domed nest. Though, it takes up to 40 days to construct, which is way longer than most other birds require. Let’s just hope it comes in under budget.

4. Magpies Have Been Living With People For Thousands of Years
“Historical records of the American West indicate that Black-billed Magpies have been associates of people for a long time. Magpies frequently followed hunting parties of Plains Indians and fed on leftovers from bison kills.” – AllAboutBirds.com Technically that makes them synanthropes. It also means they’re perfectly happy in our City. They’re still following us and taking advantage of what we leave behind.

5. The Magpie Doesn’t Give Up
“The bison herds they once depended upon are greatly diminished. And they have a long history of run-ins with ranchers”. “In the early part of the 20th century, many were killed as pests or poisoned by baits set out for predators. In spite of this, Magpies remain common and widespread” – Audobon.org. Despite how you feel about the magpie, it’s a survivor, persistent, and isn’t going anywhere. It’s had its ups and downs but still keeps up with the best of them. 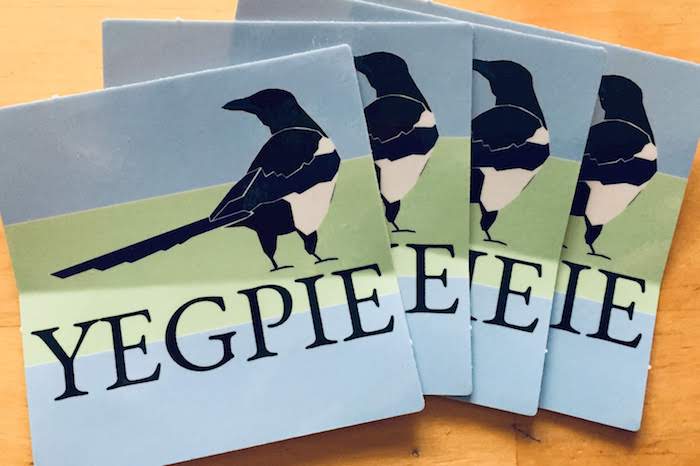 6. Magpies Are Crazy Smart
The local magpie belongs to a group of particularly intelligent birds called corvids. A group that includes crows and jays and is “capable of using tools, playing tricks, [and] teaching each other new things”. The ability to pass down lessons between generations making magpies part of a small handful of animals that have a culture.

7. Magpies Are Community Focused
Magpies live in loose communities and share in the responsibility of caring for each other. They even hold funerals. Pairs mate for life, construct their nests together and share the responsibility of caring for the young. They know they’re better off working in cooperation than alone. Edmontonians have a history of community and working together. One of the first cities in Canada to adopt the community league model, I have found this city to be exceptionally supportive of new ideas.

8. Don’t Mess With Magpies
Though not known as an outwardly aggressive bird, they’ll passionately defend themselves and each other from signs of danger. If a magpie could wield a machete, you bet it would.

9. The Magpie Is Attractive
Though you might not think there’s anything special about black and white when the sun hits a magpie just right it shines.

11. It’s The Bird We Love To Hate
Perhaps the most compelling reason that the magpie is a fitting symbol of Edmonton is that we can’t stop complaining about it. Despite all of its redeeming qualities it sometimes drives us crazy. The magpie is the Metro LRT Line of birds. We’re happy to have it. We just wish it behaved a little better. Like Edmonton, the magpie is underrated, under-appreciated, and underestimated. The bird we’re scared to embrace. Edmonton is a magpie.