Why Would We Want To Bring Back Extinct Animals?

1. De-Extinction can increase biodiversity and re-create missing ecological niches. Lost plants and animals may have been important for the overall functioning of an ecosystem. By replacing them with surrogates (similar species) or the real thing (de-extinction) could help restore long lost ecological patterns.

Example: Giant ground sloths fed on large fruits and nuts. The fruits and nuts, in turn, relied on the sloths for seed dispersal. Avocados are believed to be one such plant.

Example: Mammoths and other megafauna maintained an open savanna-like grassland in Northern latitudes. Thousands of herbivores grazed for grass over long arctic winters. As they exposed the earth they cooled it. Over time, this prevents the melting of permafrost and the release of dangerous climate changing methane gas. There are currently experiments in Russia to recreate this original biome (Pleistocene Park). It has been argued that replacing missing animals (such as the mammoth) could help slow climate change, through the ecosystems they create and maintain. This form or de-extinction is often referred to as Pleistocene rewilding.

Example: A flock of passenger pigeons was said to be so thick that they blocked out the sun. These flocks (containing billions of birds) were giant nutrient conveyer belts that transported nutrients up and down the East coast of North America. Returning the bird to the environment could return an important nutrient cycle to the continent. This work is being pursued by the LongNow Foundation and their Revive & Restore project.

3. De-Extinction Challenges A Dangerous Cultural Narrative (my touchy-feely answer). I believe that it’s important to challenge the cultural narrative that the human species is inherently destructive (especially when it comes to the natural world). Don’t get me wrong, we’ve done a lot of terrible stuff and any approach should be well thought-out. But there’s nothing in our DNA that says we’re inherently destructive. If we changed the way we viewed ourselves, we could be a force for nature. I for one like to think that we have the ability to create (or recreate) abundance.

The inspirational picture below if from a slideshow given by Ryan Phelan (co-founder and executive director of Revive & Restore). The slide suggested that, if we play our cards right, we can create abundance. 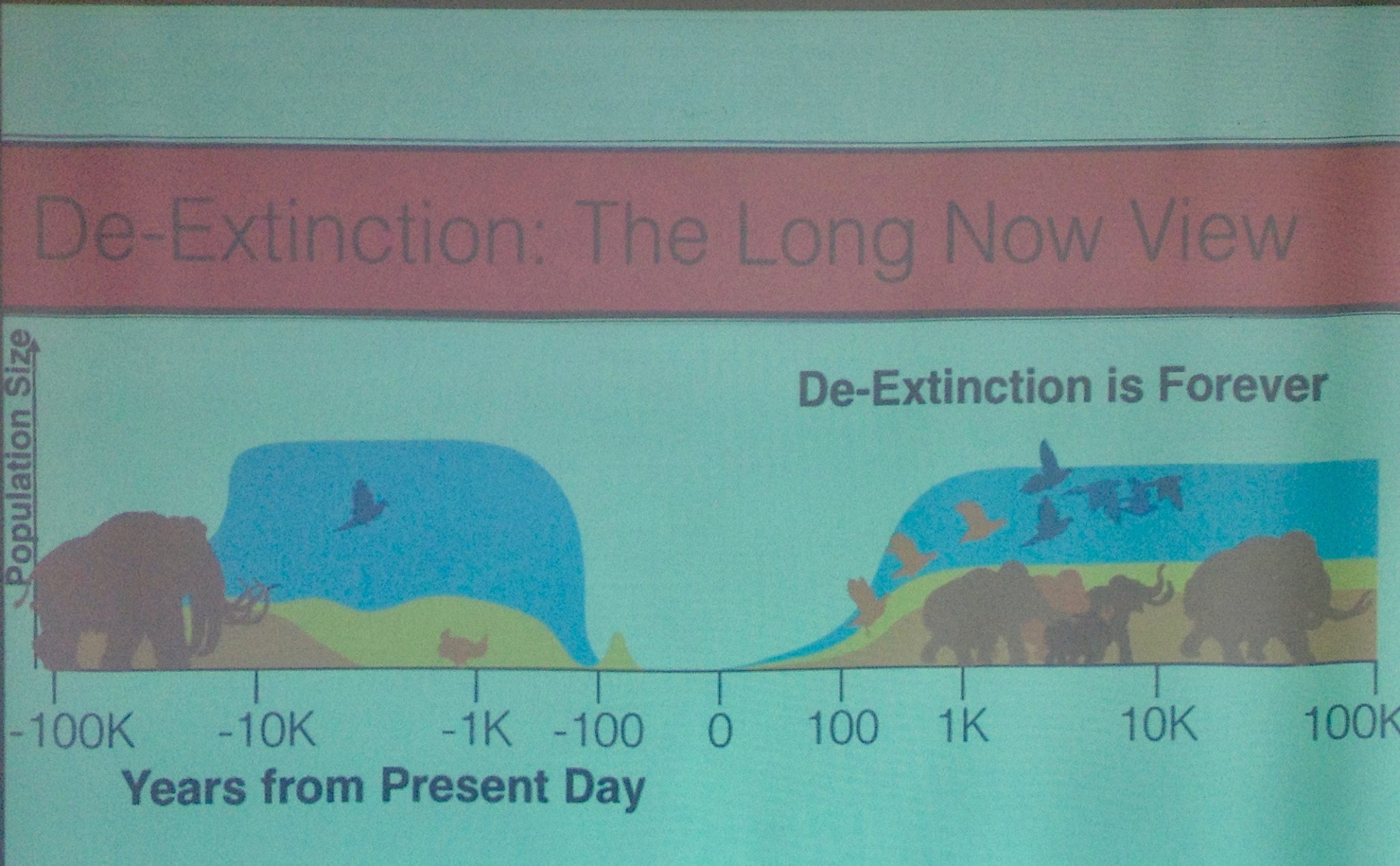 Are we living in an Extinction cliff or extinction valley?